Poet Anders Carlson-Wee on the skateboarding aesthetic, the benefits of dumpster diving, and the dangers of ideological conformity.

Anders Carlson-Wee is the author of The Low Passions (W.W. Norton, 2019). His work has appeared in BuzzFeed, The Paris Review, Ploughshares, Virginia Quarterly Review, Poetry Daily, The Sun, The Best American Nonrequired Reading , and many other publications. His debut chapbook, Dynamite, won the Frost Place Chapbook Prize. He is the recipient of fellowships from the National Endowment for the Arts, the McKnight Foundation, the Camargo Foundation, Sewanee Writers’ Conference, Bread Loaf Writers’ Conference, and the Napa Valley Writers’ Conference, and he is the winner of the 2017 Poetry International Prize. In 2018, “How-To,” a poem of Carlson-Wee’s published in The Nation,  was widely criticized for using black vernacular and ableist language. Writer Denton Loving conducted the following interview through a series of email exchanges.

Even though you’ve earned an MFA and studied with poets in traditional settings, your work seems born from the aspects of your life that are non-traditional: dumpster diving, train hopping, wilderness survival training, and the fact that both of your parents are Lutheran pastors. What was the pivotal moment that pointed your life toward poetry?

I’d say the moment I became a skater. I was ten years old. I wouldn’t have been able to articulate it at the time, but that’s when I intuitively understood that I wanted a life in the arts. I began a serious study of aesthetics—both through skating itself and through filming and photographing skating—which lasted for nine years. I was extremely committed and pursued no other interests during those years. My love for skating also made me aware that I’d never have any real money, so at age ten I began to think about how to live frugally as an adult. Following that line of thought has allowed me to write full-time.

After graduate school, you returned to Minnesota. How did going home effect affect your work?

The Low Passions is set in Minnesota and its adjacent states, and reentering its landscape and culture was more profound for my work than I thought it would be. Being back definitely helped me finish the book. The return also gave me the inspiration for my next book, which I’m deep in the mud of now.

I’d been away for 13 years, so moving back felt heavy. My grandpa had just died, leaving a big hole in the state. He taught me about dumpster diving and living frugally. If he owned something, he had a story of how he found it or came by it cheaply. Wastefulness was a moral concern for him, something he couldn’t stand for. The issue shaped his spiritual and political life.

What has it been like to see Minneapolis at the center of the Black Lives Movement after George Floyd’s death?

I was born in Minneapolis and have spent much of my life there. Most recently I lived there from 2015-2019. Seeing this tragedy in Minneapolis has been devastating. Each time such evil happens, there is a feeling of utter shock, but Minneapolis has had a long history of such atrocities. I was there two weeks after Floyd was murdered. It was very painful. My mom’s church is four blocks from the Third Precinct and the neighborhood was almost unrecognizable, buildings burned to ash, great holes of charred metal where structures had collapsed, graffitied signs pleading, “Don’t burn, children live upstairs.” The sustained movement of peaceful protests across the nation and around the world has been deeply inspiring, and I’m proud of Minneapolis for igniting such a large and important movement. As the movement continues, it’s encouraging to see legislative changes that address police brutality and systematic racism proposed at so many levels of government. In Minneapolis-St. Paul, I’m moved by the many ways the community has organized and engaged—from street cleanups to demonstrations to the City Council’s vote to dismantle the police force, and much more. Hope is alive there.

I’ve always been fascinated by your dumpster diving. Have you been diving during the pandemic?

Yes, heavily. Dumpster diving is my favorite thing to do. I’ve done it for 16 years. Financially, it’s allowed me to write. Environmentally, it’s been an ongoing education in American consumerism, capitalism, and appalling greed. It’s also turned me into a bit of a detective. I find lots of notes between employees at supermarkets—shift swaps, plans for weekends, inside jokes. I find reports on shoplifters—what they look like, what they stole. I find breakroom snacks labeled with names. Slowly, I get to know all the staff, their taste in food, their hobbies, etc. There’s also the story of each individual piece of food: Why did this get thrown away? It’s all very interesting to me.

As for the pandemic, I’m less nervous about dumpster diving than about social interactions, including shopping at the grocery store.

In a past interview, you said, “I ran from the cops a lot, got arrested at eleven, broke a bunch of bones, filmed skate videos, and hung out with homeless dudes who frequented the same spots as the skaters. It was a real raw scene, out in the streets every day.”

I grew up in a religious home, attending both my parents’ churches. My wider family is made up almost entirely of pastors and social workers. Daily dinnertime prayers focus on such lines as: “In a world where many are hungry, we are thankful for food.” Scripture like “Blessed are the poor, for yours is the kingdom of God” is a resounding hum in the background of life. I would say my family as a whole has been called to humanitarian work, devoting its collective efforts toward social justice, sustainability, spiritual development, and serving those experiencing homelessness. A few of us have tried to contribute through poetry.

Anyone who reads your work closely can see that you’re writing about real people, writing about situations that you’ve investigated closely. Even though you could be described as privileged—being a young, white, well-educated man—it feels as though you understand the homelessness situation in our country better than most.

I’ve tried to write poems that meditate on homelessness and other issues in the tradition of the prayers, hymns, sermons, and liturgy that shaped me. I hope it helps readers think for themselves and transform themselves.

A poetry editor recently told me that he wished he received more submissions in the voices of other people. Does something magic happen when you place yourself in the life of someone else?

Absolutely. It’s the same magic that happens every time an actor takes the stage. There’s a stretching of the self—even a stretching of the idea of a self. How much of who we are is fixed, how much is liquid, changeable? How singular are we, how duplicitous, how contradictory? Can we get outside our perspective? Developing the “acting” muscle also encourages heightened awareness, a sensitivity to others. Listening. Noticing gestures. There’s so much invention in creating characters, and the process seems to teach us about ourselves.

Who is the particular writer who has most influenced you and your work?

Jack Gilbert’s poetry has had a deep impact on me. But my aesthetic is more profoundly shaped by the structures of skate tricks. My entire childhood centered around skating. Skating was my first aesthetic language, and all of my writing is filtered through its vocabulary. Skate tricks are designed to be seen. The beginning of every trick creates a conceit with the viewer. It starts telling you a story. That story is built of body posture, foot position, speed, angle of travel, tilt of the neck, etc. From there, most tricks head in one of two directions—toward graceful follow through, or toward surprise. A graceful trick makes good on its original conceit, with the goal of a beautiful execution. A surprising trick shatters its conceit, with the goal of subverting the viewer’s expectations and thereby deepening their level of attention, while also stretching the possibilities of what skating is, what it can express, what it could become. Yet if a skater focuses solely on surprise, surprise becomes the expectation and is lost. And if the surprise is too far outside the bounds of the language of skating, it risks being a one-off. The best skaters use both these approaches, as well as others.

This description of skate tricks is terribly simplified, but the point is, the language of skating is the basis for how I write my poems. Ironically, skating exists outside of language, and mostly outside of narrative. Skating is more akin to visual art or music or dance. It’s about line, rhythm, pacing, juxtaposition. It’s about color and light and shadow. And it’s an ever-evolving exploration of the human body—its shapes and movements and moods. As a poet with a deep inclination toward narrative and clarity, I think my background as a skater offers an important counterbalance, an intuitive access to the primal.

A lot of writers are struggling to navigate all of this era’s ongoing complexities. Last month, Harper’s published an open letter decrying the cancel culture, arguing that open debate is integral to a liberal society. Their underlying argument is that too much ideological conformity is dangerous. How do you navigate this?

My feelings about ideological conformity are tied to the Internet and the future of artistic originality. For the arts, the Internet provides unprecedented levels of access and is quickly reshaping economic models and traditional gatekeeping, making art more egalitarian. More than ever before, the diverse and myriad expressions of the human spirit can be shared on a mass scale. This has great potential for art as a product, after the act of creation is finished.

The Internet, however, is often a place of speed and flippancy, and I do wonder if art can be deeply engaged within that environment. I’m also wary of its influence on artists, particularly with regard to social media. Artists in search of original vision need a certain distance from community. In the digital age, ideas in incubation are less likely to be safeguarded from influence or given time to develop depth inside an idiosyncratic mind. Works of art, in evolutionary terms, are mutations—mostly useless, but occasionally paramount to the future of the community precisely thanks to their profound originality. Because social media is a hub, a gathering place, it is therefore a place of conformity. Artwork might have a role there, but artists do not.

About the Author / Denton Loving

Denton Loving is the author of the poetry collection 'Crimes Against Birds' (Main Street Rag) and editor of 'Seeking Its Own Level,' an anthology of writings about water (MotesBooks). His writing has recently appeared in 'Iron Horse Literary Review,' 'Kenyon Review,' 'The Chattahoochee Review' and 'The Threepenny Review.' 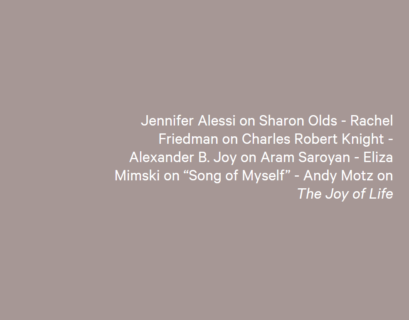