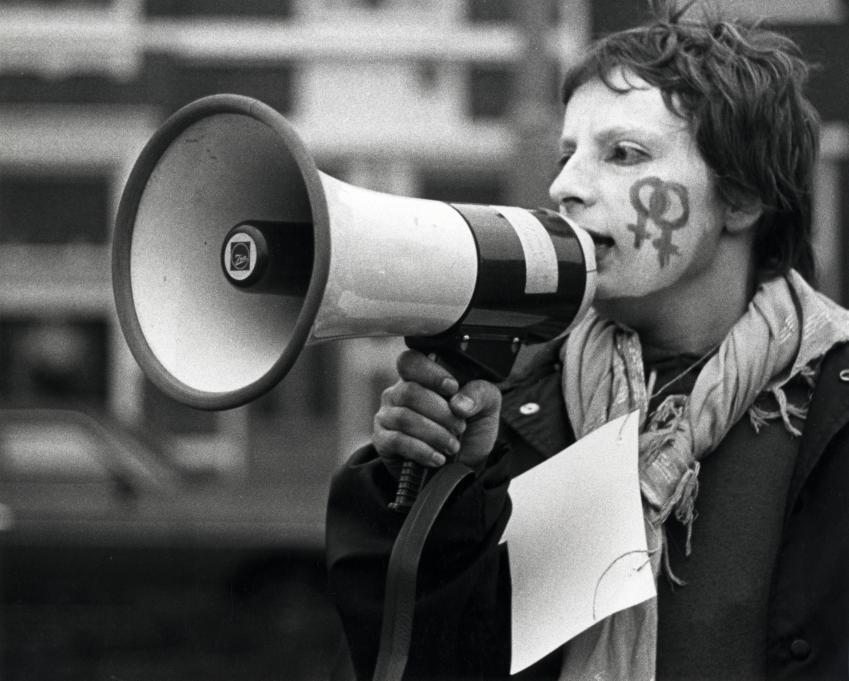 On Not Being Silent

A journalist’s priorities change after an encounter with the work of the feminist poet Audre Lorde.

I left my journalism career shortly before I found the writer Audre Lorde. I no longer wanted to sit in the back of the room and report what the county commissioner said. I wanted to critique the culture I had only been watching, and in Lorde’s more profound words, I sought to transform silences into bridges. She wrote, “The fact that we are here and that I speak these words is an attempt to break silence and bridge some of those differences between us, for it is not difference which immobilizes us, but silence. And there are so many silences to be broken.[1] I instantly recognized her as my teacher—in feminism and self-care, of the practice of doing social justice work, and of teaching me when to listen and when to speak out.

We readers honored her this last November, during the week of the 25th anniversary of her death. So many who write and speak about Lorde today comment that they felt that she spoke to them personally when they were first reading her work. She called readers to action:

What are the words you do not yet have? What do you need to say? What are the tyrannies you swallow day by day and attempt to make your own, until you will sicken and die of them, still in silence? Perhaps for some of you here today, I am the face of one of your fears. Because I am woman, because I am Black, because I am lesbian, because I  am myself, a Black woman warrior poet doing my work, come to ask you, are you doing yours?[2]

It was through her writing that I came to learn much about race and racism, gender and sexism, privilege, the concept of intersectionality, and always the need to talk about and respect difference. As a college professor of gender studies and history, I select her works again and again when crafting new syllabi on African-American history, women’s history, and feminist theory.

In one of my favorite of her lines, Lorde asked, “to whom do I owe the woman I have become?”[3] She went on in her 1982 biography to count off the women who helped and hurt her as she grew. Like Lorde, I also identify women as my primary sources of energy and support throughout my life, and when I ask that question of myself, so many memories flood back to me. My very first friend who stayed awake with me during nap time and pulled all the yarn out of a purple pillow. My grandmother rolling out dough in her pink, black, and white kitchen. My teenage friend who passed a stack of my writing to her professor parent. Even a friend who had the courage to ask me to coffee after a drawbridge had been pulled up between us. These are the women I dream about: the ones I still don’t understand, and the ones I do. The women and girls that I walked with, our footsteps in tune, our opinions aligned, walking until a fissure grew, for various reasons, and then one of us grew silent, and then two.

And when I ask that question again—to whom do I owe the woman I have become, I also of course list Lorde as one of the women who opened my eyes as a younger reader and writer; who gave me theories, essays, and stanzas for small and large hurts that I had either felt or watched all my life—the gender politics within my family; the hierarchies I witnessed in the classroom and in the schoolyard; the ways my ideas and body were received in the newsroom, on a dance floor, on the running trails behind my apartment in Baltimore. She taught me that poets are born in childhood, that children recognize injustice early, and that writing it down won’t save us, but it might help. Above all, Lorde encourages us all to unmask silence.

I am now nearing midlife, and it has taken me quite a few years to realize that I have a voice, that I need to use it, and what I need to use it precisely for: to find and tell stories of underrepresented populations in historical narratives, and at times to tell my own stories, and in this storytelling, to try to guide college students to understand systems of inequality and to understand what it means to take a step toward justice. I will not tell you that this is easy work. I think back on all of the times when I lacked either the energy or confidence or vocabulary to speak out against institutional and domestic inequalities and oppressions I noticed, felt, or faced. In these moments, I feel a genuine tenderness toward the child I was, watching events unfold, struck by the ferocity of my mother’s hardships, the burdens of my grandmother—some of which I now see as just one or two more anecdotes contributing to the still unfolding sprawl of 20th-century immigration history, women’s struggles for equality, Jewish songs of sorrow, and the national narratives of double binds and double standards. But now I often speak—“feminist killjoy” that I am—against the grain, knowing the ways in which women’s criticisms and anger are often misunderstood, ill received, and misinterpreted.[4] I speak in and out of the classroom, in my family, at synagogue, in essays and story. I also fail to speak at times, and I sometimes get it wrong, because this is inevitable. I try again.

This fall I am a Lego robotics coach for my five-year-old’s team. I am an unlikely candidate for this position, so I have been reading about water and weather for our newest project design in my spare time. I recently read about atmospheric rivers, which are long, narrow rivers that transport water vapor and release it as rain or snow. Big enough atmospheric rivers create extreme rain and floods, disrupt best-laid travel plans, induce mudslides, and wreck property. Still, science writers refer to these at times destructive masses as “rivers in the sky,” an expression that haunts me. Rivers in the sky are not easy-to-build Lego structures, but they do conjure up for me how it sometimes feels to carry the weight of a story and what it is to finally release it. In these moments of speaking out, I become a river in the sky and have equal parts fear and hope that my words will also disrupt plans and induce mudslides.

Today I lean on Lorde’s writing and criticisms of culture again and again in my classes and essays because without stories, how do we understand the world? How would we make meaning of a conversation that rubbed us the wrong way, a news headline, of a job negotiation gone wrong, of a leering boss? Lorde has been a guide at these critical moments in my own writing life when I’m perched between shrugging something off and nailing it to the wall. Speak, she tells us, “Your silence will not protect you.”[5] Yes, it is fraught with danger. Yes, it will render you vulnerable. But it will also free you, she explains when I need it most, each of us “here now because in one way or another we share a commitment to language and to the power of language.”[6] Lorde has urged me to find her words—and also my own—when I need them most.

About the Author / Jamie Wagman

Jamie Wagman is an Associate Professor of History and Gender & Women’s Studies at Saint Mary’s College in Indiana. She has a master’s degree in nonfiction writing and a Ph.D. in American Studies, and her creative work has also appeared in Nashim: A Journal of Jewish Women’s Studies and Gender Issues, The Adirondack Review, Newfound, and most recently in the 2017 anthology, Nasty Women and Bad Hombres.